This is the study done by the plaintiffs in the 3rd Runway Lawsuit. Everyone interested in this issue should start here by reading the executive summary.

There is no doubt that the expansion of Sea-Tac International Airport will have a pos1t1ve economic benefit for the region and the State. However, the costs associated with these improvements are disproportionately borne by those communities immediately surrounding the Airport. Communities such as Burien and Des Moines are projected to be impacted by noise, traffic congestion, and socio-economic hardship merely because of their location near the Airport. Of the estimated $2.95 billion in potential mitigation costs, $2.3 billion (almost 80%) is projected to be required for Burien and Des Moines alone. Other environmental, transportation, and socio-economic costs have not yet been calculated. This study does not assign mitigation costs to any particular agency. While the Port of Seattle and the Federal Aviation Administration will be financially responsible for a portion of the mitigation costs, funding from other sources is also expected. For example, increased transportation funding is available through the Washington State Department of Transportation and the Federal Highway Administration. Some environmental mitigation costs may be eligible for State and Federal EPA funding. Costs associated with acquisition and redevelopment may be shared between private and public-sector interests. This study also does not dispute the projections included in the EIS, such as noise contours and future flight-tracks. It recommends that these projections be assumed as accurate and that any required mitigation program(s) be based on the Airport meeting -not exceeding -these projections. For example, a permanent noise monitoring program should be established to verify that the projected noise contours are not exceeded. Should these or other parameters be exceeded, the EIS should be re-conducted and additional mitigation programs be developed, This approach positively works with the Port of Seattle to assure both the Airport and Airport-area communities that the EIS will be a valid document. The study also recommends the need for an overall planning approach to development in Southern King County. The study recommends the development of a “South King County Comprehensive Plan” to weave together a plan that addresses the needs of all interests in the area-communities, residents, businesses, schools, hospitals, the environment, and the Airport. Pr-oject Par-ameter-s This report was produced under a grant from the State of Washington to analyze the proposed Third Runway project at Sea-Tac International Airport. The City of Burien, acting in the capacity of the grant manager, supervised the consultant team. The study examined the potential impacts of the Airport project on neighborhoods in the surrounding communities of Burien, Des Moines, Federal Way, Normandy Park, and Tukwila. Potential impacts on facilities owned and operated by the Highline School District and Highline Hospital were similarly examined. Executive Summary February 1997 Page ES-1 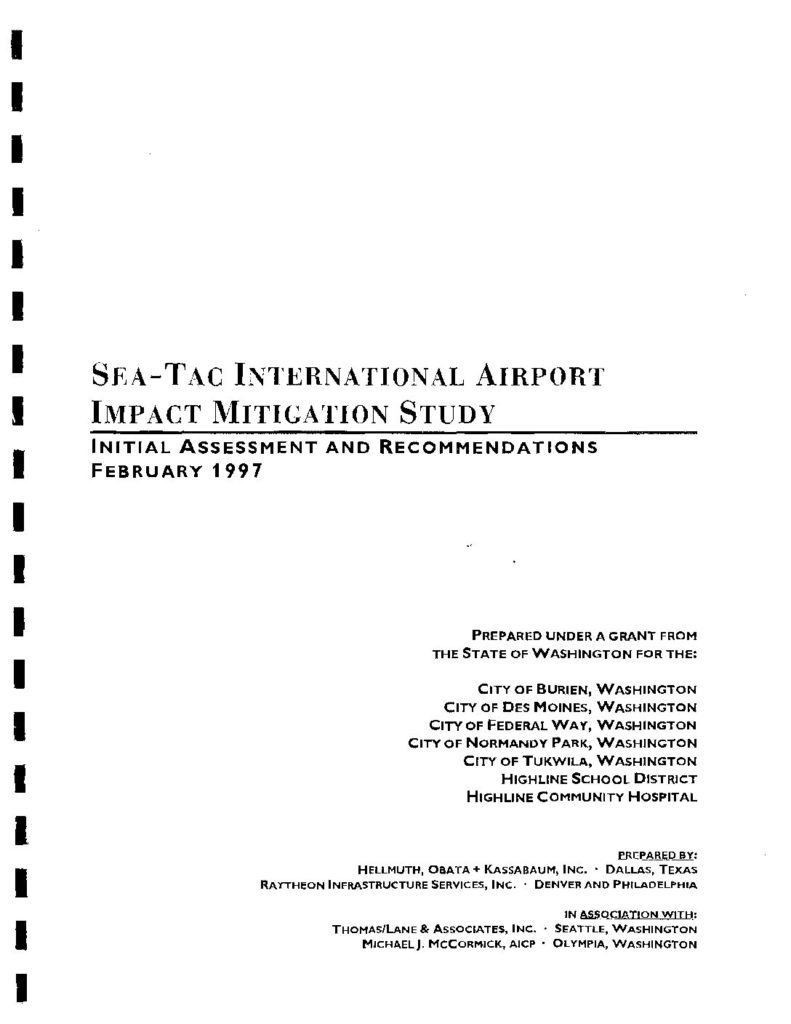