A Delta jet headed to LAX for emergency landing dumped fuel on a school playground, causing skin irritation to 20 children and nine adults.

Delta Flight 89 — a Boeing 777 — had taken off from LAX with more than 140 passengers on board and was en route to Shanghai when it turned around and headed back to the L.A. airport.

“Shortly after takeoff, Flight 89 from LAX to Shanghai experienced an engine issue requiring the aircraft to return quickly to LAX,” Delta said in a statement released Tuesday night. “The aircraft landed safely after a release of fuel, which was required as part of normal procedure to reach a safe landing weight. Delta is in touch with Los Angeles World Airports and the L.A. County Fire Department as well as community leaders, and shares concerns regarding reports of minor injuries to adults and children at schools in the area.”

The plane is 20 years old and makes daily flights from Los Angeles to Shanghai. In recent weeks, the plane had also made trips out of L.A. to Paris and Tokyo.

The flight is typically a 13-hour nonstop. This one lasted about 25 minutes. 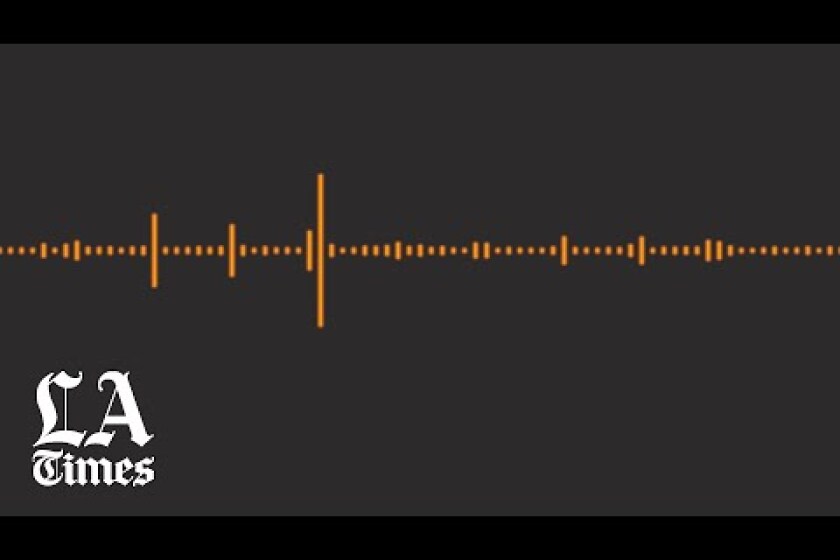 At 11:47 a.m., an LAFD firefighter radioed that they were responding to a call at LAX.

“We have a Boeing triple 7, call sign Delta 89, reporting a compressor stall, 181 souls on board, 12 hours of fuel, ETA less than five minutes,” an LAFD firefighter said.

When the compressor of a plane’s engine stalls, it can cause the loss of airflow through an engine, which can cause the engine to fail.

Passenger Tim Lefebvre, a bass guitarist headed to China for gigs, was sitting at the front of the plane when he heard loud popping sounds.

“It was kind of right next to me,” Lefebvre said. “I knew that wasn’t good. The pilot came on a couple minutes later and said we were going back to LAX, and that was that.”

The pilot told passengers that there had been an engine problem and that they shouldn’t be alarmed if, when the plane landed, they saw firetrucks on the runway, Lefebvre said.

Everyone on board remained calm, although the flight attendant seated near Lefebvre looked concerned, he said.

“Just imagine if we had been over the Pacific a good distance,” Lefebvre said. “That would not have been good.”

A total of 60 patients were treated, at least 20 of them children. The Los Angeles County Fire Department said more than 70 firefighters and paramedics headed to Park School Elementary, where 20 children and 11 adults were treated for minor injuries. No one was taken to the hospital. Additionally, six people at Tweedy Elementary School and six at San Gabriel Elementary in South Gate were affected, as was one adult at Graham Elementary School. L.A. City Fire treated 16 patients at Jordan High School in Los Angeles and 93rd Street Elementary in Green Meadows.

LAFD spokesperson Nicholas Prange said two classes were outside Park Avenue Elementary when the liquid rained down shortly before noon. Students and staff were instructed to go indoors and remain there for the time being.

Park Avenue Elementary School sixth grader Josue Burgos was participating in physical education outside when he was surprised to feel the sensation of rain. The 11-year-old in Mariana de la Torre’s class looked up to see a plane barreling down on his campus.

“We came out and we were playing, and the airplane was outside and we thought it was rain, but then we knew it was throwing gas on us, and everybody started to run,” Josue said. “We went to the auditorium and we knew what happened. We went back to class. We stayed for one hour and then we went home.”

Josue said fuel landed on his sweater, shirt and shorts, and the odor was immediately noticeable.

Parent Freddie Contreras, who lives about a block away from campus, thought he saw glass crashing down outside his apartment.

Contreras raced out of the complex to find an overwhelming odor emanating not just from the roof and surrounding pavement, but from his white 2016 Honda Civic, which had been doused in fuel.

While Contreras’ son Mateo, a Park Avenue first-grader, was unharmed, sister-in-law Yesenia Pantaja, who also lives in the complex, complained of a headache. 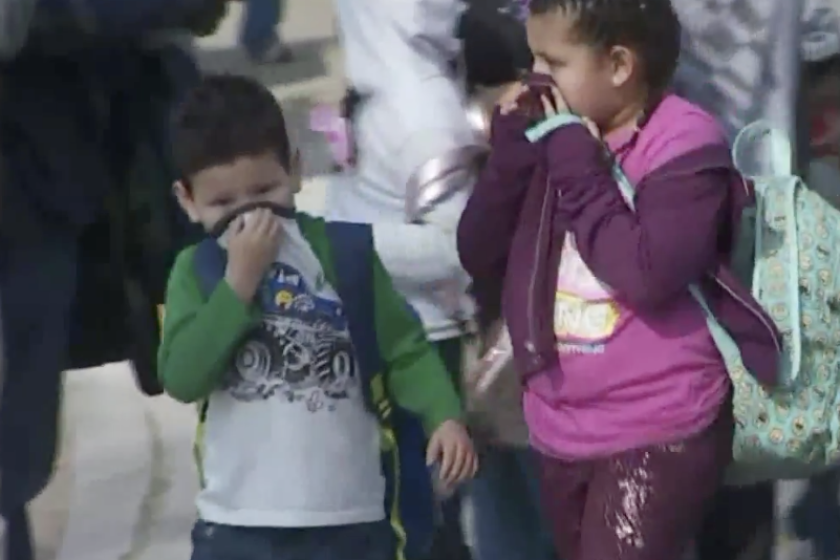 While Park Avenue parent Francisco Javier was relieved that his first-grade son was inside his classroom and unaffected by the fuel dump, he was careful not to inhale too deeply.

“You should have been here when it first happened,” Javier said. “You couldn’t breathe it was so bad. It’s still strong, but not as bad as it was.”

Javier, who lives across the street from the school’s main entrance, walked outside to assess the situation and observe the crowd of media, fire and police. He then headed back into his apartment to close and lock all the windows.

Sixth-grader Miguel Cervantes was one of several students taking part in physical education classes outside when he was confused by what was happening.

“I saw an airplane and I thought smoke was coming out,” Miguel said. “Then when it got closer, I knew it was gas because a little bit fell on me.”

Miguel said that fuel hit parts of his shirt and pants and that within an hour he had been sent home. 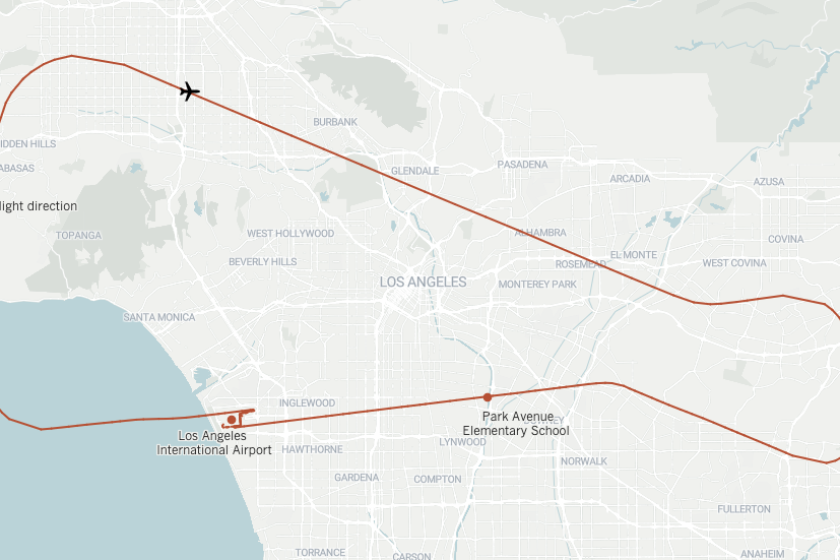 Miguel’s mother, Ana, received a call about the events and rushed over to Park Avenue.

“Just a small amount landed on my son’s clothes and on his arms, but we washed him with soap and changed his clothes and he seems fine,” Ana Cervantes said.

When asked if she would destroy her son’s clothes out of caution, Cervantes said the measure was too drastic.

“Those are expensive clothes, we’ll just wash them with soap and water,” she said.

Ross Aimer, the chief executive officer of Aero Consulting Experts, said fuel dumping is very rare and is used only in case of emergencies or if pilots have to reach a safe landing weight, as was the case in Tuesday’s incident.

“Most pilots choose not to dump fuel unless the emergency really dictates it,” Aimer said.

A possible emergency would be non-functioning landing gear that would otherwise make it difficult to control the plane.

When pilots dump fuel, they typically try to do it at above 10,000 feet and over water, but ideally it should be done at higher elevation because then the fuel turns into mist and it’s away from populated areas.

Aimer said that without knowing what Flight 89’s emergency was, the pilot may have been in the final stage of dumping fuel as the plane was heading toward LAX. He said there is also a good chance the pilot made an error.

“I don’t remember anyone dumping fuel over population,” he said. 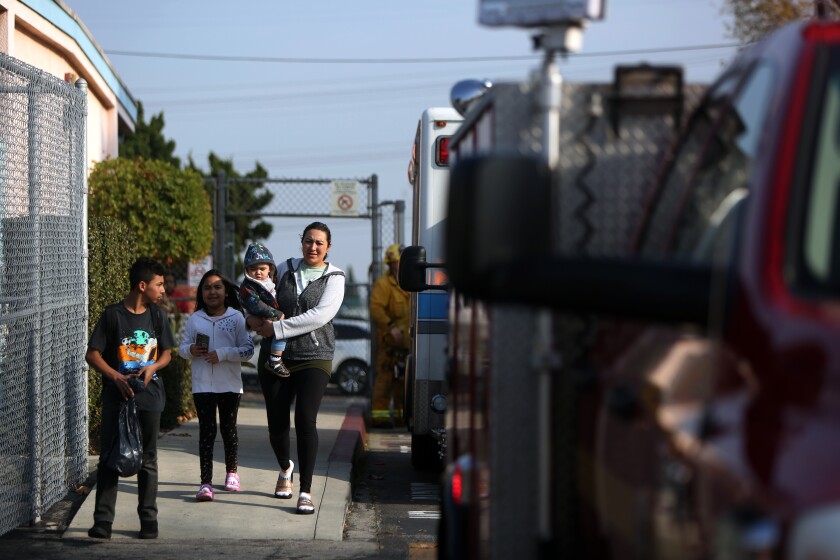 California
Why did Delta jet shower fuel on schoolchildren? Experts call it rare and concerning
Jan. 14, 2020

The Federal Aviation Administration is investigating the matter.

“There are special fuel-dumping procedures for aircraft operating into and out of any major U.S. airport. These procedures call for fuel to be dumped over designated unpopulated areas, typically at higher altitudes so the fuel atomizes and disperses before it reaches the ground,” officials said in a statement.

An example of an unpopulated area would be an ocean, said Douglas Moss, aviation consultant and a retired United Airlines pilot.

To make an emergency landing, a pilot will try to get the airplane down to its landing weight so there are more options in case of an aborted landing attempt. How and where that fuel dump happens depends on the type of emergency, said Tom Haueter, former director of the National Transportation Safety Board’s Office of Aviation Safety.

The drop will typically happen at an altitude of 5,000 feet so the fuel vaporizes before hitting the ground. But if there is a severe emergency, plans may change.

“The real key is to know what’s the nature of the emergency,” Haueter said.

In an emergency, the captain is “authorized to break any rule in the book,” Moss said. “He still tries to adhere to as many of the rules as he can, but the bottom line is his actions must be in the best interest of safety.”

Cudahy officials expressed disappointment over the incident and were demanding answers about why the fuel was dropped over the school.

“I’m very upset,” she said in a phone interview. “This is an elementary school, these are small children.”

The incident hit a nerve in the community. Environmental injustices have long taken place in southeast Los Angeles County. For years, activists and residents fought for the closure of a battery recycling plant in the industrial city of Vernon because it emitted cancer-causing arsenic and lead, a potent neurotoxin, into nearby cities.

It was only five years ago that the plant was closed.

“Why is it always our communities having to deal with the brunt of these issues?” Alcantar said.

The jet-fuel dump incident has raised questions about environmental safety and the flight path over Cudahy and other cities.

“Sadly, our entire community has been adversely impacted by this incident, including dozens of children. I am calling for a full federal investigation into the matter, and expect full accountability from responsible parties,” Cudahy City Council member Jack Guerrero said.

Emergency incidents of jet fuel being dumped over populated areas have been reported across the United States in previous years.

In 2007, a 744 KLM Royal Dutch Airlines flight to Amsterdam returned to San Francisco Airport after the pilot realized the plane’s nose gear would not retract. The pilot released fuel 15,000 feet above Stanislaus County.

In 2001, jet fuel rained down on residents in Flower Mound, Texas, as an American Airlines plane flew back to Dallas-Fort Worth International Airport. The pilot said at the time that a warning light came on, leading to a fuel release.

Three years prior, in 1998, another American Airlines flight was involved in a similar incident in New York when 3,200 gallons of fuel were dumped over homes in Queens. The pilot said a large bird had flown into an engine under the right wing.

The Delta jet landed safely at LAX soon after dumping the fuel. Police could be seen driving behind the plane with sirens wailing as it arrived.