To require the Federal Aviation Administration to provide funding for
noise mitigation, and for other purposes.

IN THE HOUSE OF REPRESENTATIVES

To require the Federal Aviation Administration to provide funding for
noise mitigation, and for other purposes.

Be it enacted by the Senate and House of Representatives of the
United States of America in Congress assembled,

This Act may be cited as the “Aviation-Impacted Communities Act”.

Notwithstanding any other provision of law, aviation-impacted
communities that are not currently within the 65 DNL standard as
measured by the Federal Aviation Administration shall be eligible for
the Airport Improvement Program noise mitigation program funds and for
grants under section 7, and shall also be granted status under section
5 to establish community boards to address airport noise in their
communities.

(a) In General.–The Administrator shall enter into a contract with
the National Academy of Sciences to conduct a study that–
(1) summarizes the relevant literature and studies done on
aviation impacts worldwide;
(2) focuses on large hub commercial airports and
surrounding communities, including communities currently
outside of the 65 DNL contour in–
(A) King County, WA;
(B) Boston;
(C) Chicago;
(D) New York City;
(E) the Northern California Metroplex;
(F) Phoenix;
(G) the Southern California Metroplex;
(H) the District of Columbia;
(I) Atlanta; and
(J) any other metropolitan large hub airport
identified by the Administrator.
(b) Contents.–The study described in subsection (a) shall
examine–
(1) the collection and consolidation of quantifiable,
observational, experiential, anecdotal, or other data from–
(A) the Federal Aviation Administration;
(B) airport operators;
(C) valid acoustic instrumentation on the ground;
(D) testimonials and other evidence from community
members; and
(E) organizations in the community;
(2) the Day-Night Average Sound Level, using measured data
or modeled data (or other noise metrics, as applicable);
(3) any other existing or supplemental noise metrics from
data collected by noise monitor stations;
(4) emissions generated by individual and cumulative
takeoffs and landings, including emissions that impact the
ground level;
(5) lateral trajectory and altitude of flight paths as
demonstrated by actual and comprehensive radar flight track
data in addition to published routes;
(6) how aviation impacts communities surrounded by multiple
airports;
(7) how aviation impacts communities with unique geography,
including communities situated at higher elevation or near
large bodies of water;
(8) any other data requested by the impacted community in
order to give a comprehensive understanding of the impacts on
such community, including comparative data for equity analysis;
(9) recommendations on actions or mitigation that can be
taken to alleviate–
(A) concerns raised during community outreach; and
(B) effects that are determined in the study; and
(10) any other data or information determined to be
relevant by the National Academies in analyzing aviation
impacts.
(c) Framework and Diagnostic Tool.–
(1) In general.–Using findings from the study, the
National Academy of Sciences shall provide the FAA with a
framework and diagnostic tool for–
(A) conducting appropriate community assessments
upon request of community boards (including as
described in section 5(f));
(B) measuring the impact on communities of–
(i) high frequency of overhead flights;
(ii) an increase or change in flight
operations due to adoption of new flight
procedures;
(iii) high frequency or an increase in
night time aircraft noise; and
(iv) decreased dispersion of flight path
utilization; and
(C) developing a scientifically based strategy for
evaluating structures subject to increases described in
subparagraph (A)(ii) that should be eligible for noise
mitigation.
(2) Requirement.–In developing the framework and
diagnostic tool under paragraph (1), the National Academy of
Sciences shall–
(A) seek appropriate community input and feedback
from community boards as well as open community
meetings; and
(B) ensure, to the extent practicable, that such
framework and diagnostic tool is understandable to, and
useable by, the community boards and the general
public.

(a) Outreach.–
(1) In general.–Not later than 90 days after the date of
enactment of this Act, the Administrator shall conduct outreach
to State, regional, and local elected officials of aviation-
impacted communities to inform them of the opportunity to be a
designated community.
(2) Requirements.–The outreach described in paragraph (1)
shall–
(A) be conducted in local print and electronic
media (including social media, local foreign language
media, ethnic radio, newspapers, and television); and
(B) reflect languages regularly encountered in the
aviation-impacted community in any signs, materials,
and multimedia resources.
(b) Request.–The State, regional, or local elected officials (or
designee thereof) of an aviation impacted community may request to be a
designated community, and the Administrator shall–
(1) recognize such community as a designated community upon
request; and
(2) acknowledge each community requesting designation on
the website of the Federal Aviation Administration.
(c) Portions of Community.–The State or local elected officials
(or designee thereof) of a designated community, representatives, or a
group of representatives chosen by a community, shall select the
portions or the entirety of such community considered aviation-
impacted, including designating the community as a whole should such
community so choose.

(a) In General.–There is authorized to be appropriated out of the
Airport and Airway Trust Fund (established under section 9502 of the
Internal Revenue Code of 1986) to carry out this Act–
(1) a total of $750,000,000 for fiscal years 2021 through
2030; and
(2) such sums as necessary, but not to exceed 0.25 percent
of the annual change in uncommitted balance of such Trust Fund
in a fiscal year, for fiscal years after fiscal year 2030.
(b) Use of Funds.–Of any amounts appropriated for a fiscal year to
carry out this Act, the Administrator shall use such funds–
(1) to make grants under section 7;
(2) in an amount of not more than 5 percent, to support FAA
expenditures required for the administration this Act; and
(3) any amounts not expended under paragraphs (1) or (2),
to make grants described in section 47117(e)(1)(A) of title 49,
United States Code.

In this Act:
(1) Administrator.–The term “Administrator” means the
Administrator of the Federal Aviation Administration.
(2) Aircraft operation.–The term “aircraft operation”
means a landing or take-off of an aircraft flight.
(3) Aviation-impacted community.–The term “aviation-
impacted community” means a community that is located not
greater than 1 mile from any point at which a commercial or
cargo jet route is 3,000 feet or less above ground level.
(4) Commercial or cargo jet route.–The term “commercial
or cargo jet route” means a route that is departing or
arriving at a large hub or metroplex airport, as such terms are
defined by the Administrator.
(5) Community.–The term “community” means any
residential neighborhood, locality, municipality, town, or
city.
(6) Designated community.–The term “designated
community” means an aviation- impacted community that has
chosen to be designated pursuant to section 4.
(7) FAA.–The term “FAA” means the Federal Aviation
Administration.
(8) FAA designee.–The term “FAA Designee” means a
community engagement manager or Regional Ombudsman (as
described in section 180 of the FAA Reauthorization Act of
2018) that–
(A) works with each community board;
(B) engages in meaningful, solution-driven dialogue
with the community board; and
(C) serves as the liaison between the FAA and the
community board.
(9) Impact.–The term “impact” means noise, air pollution
emissions, or any other aviation-related impact identified by a
community coming from an aircraft and that is affecting a
community or its residents.
(10) Route.–The term “route” includes both the lateral
trajectory and altitude of flight paths as demonstrated by
actual and comprehensive radar flight track data in addition to
published routes. 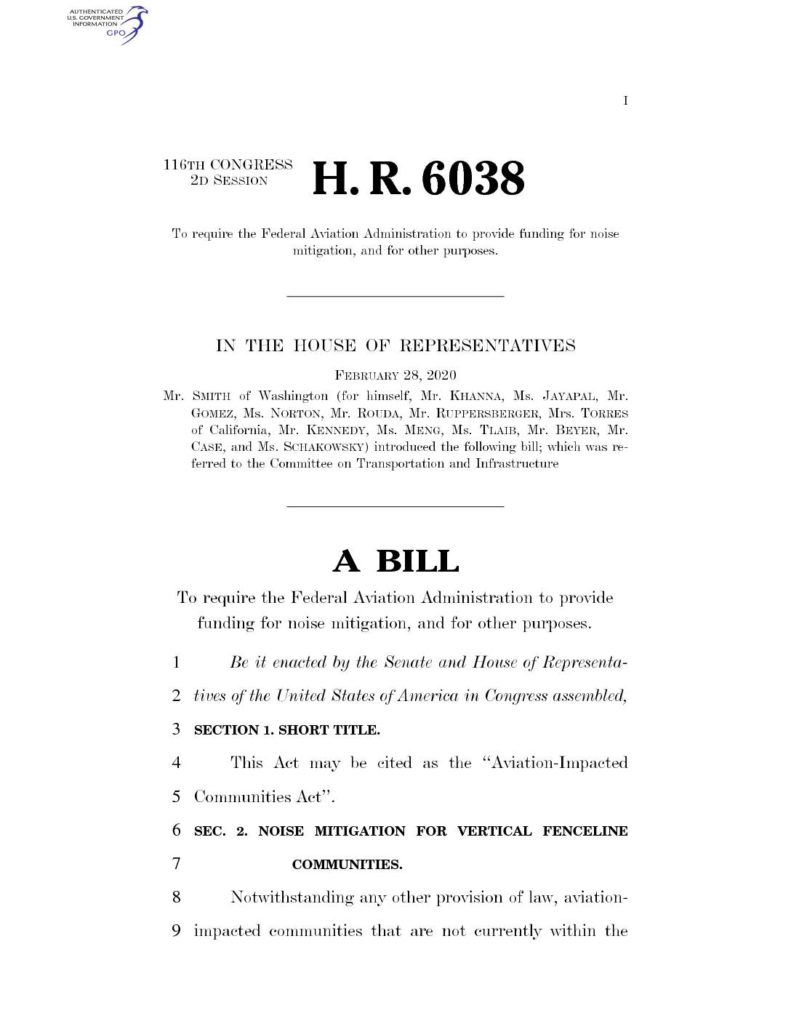