I write regarding the Government Accountability Office’s (GAO) study on the Federal Aviation
Administration’s (FAA) measurement, evaluation, and mitigation of aircraft noise in
communities surrounding “metroplexes” (areas with complex and multiple-airport air traffic
patterns). Specifically, I respectfully request that this assessment be broadened to incorporate
Single Site airports in addition to the metroplexes that the GAO is already intending to study.
On June 18, 2019, 29 Members of Congress wrote to request that the GAO study how the FAA
has considered community noise impacts while implementing the Next Generation Air
Transportation System (NextGen) in major metropolitan areas, focusing specifically on
metroplexes.

NextGen has also resulted in revised flight procedures at Single Site airports. According to the
FAA, the NextGen Single Site initiatives “seek to optimize airspace surrounding smaller cities,
replacing legacy procedures or providing new precision procedures for airports where none
existed prior.” The FAA has completed or is at some point in the study, design, evaluation, or
implementation phase on a number of Single Site NextGen projects. Communities surrounding
Single Site airports impacted by NextGen procedure changes have expressed significant concern
over noise impacts, meriting the inclusion of these Single Sites in the pending study.
I respectfully ask that the following questions- building upon questions asked in the June 2019
letter- be addressed:

2. The FAA defines “significant increase in noise” as an increase in the Day-Night Average
Sound Level (DNL) of 1.5 decibels or more over noise sensitive areas at or above the
DNL 65-decibels noise exposure level. Do the FAA’s criteria for whether changes in
noise levels are considered significant sufficiently capture potential negative impacts?

Given negative community response to new routes in areas where the FAA did not find
significant impacts would result, should the FAA revise its current metrics or develop
alternative metrics to the current DNL standard?

3. Does the FAA measure and disclose noise impacts from changes to flight paths as
adequately as it does noise impacts at airports?

4. Has the FAA become more effective at disclosing noise impacts from route changes since
it began implementing NextGen? Has the FAA changed how it addresses noise impacts
in response to litigation and settlements over flight path changes or requests from
Congress?

5. In conducting environmental reviews of proposals for new or modified routes, has the
FAA selected historical comparison data that fully and accurately captures flight paths
before route changes? Have there been cases where the flight paths actually taken by
aircraft changed significantly before the formal implementation of new routes associated
with NextGen implementation?

6. Wake RECAT has been implemented at many airports as part ofNextGen. This allows
arrivals and departures to be more closely spaced in the concentrated performance-based
navigation procedures. What has the FAA done to study the effect ofWake RECAT on
the populations affected by the increased use of these flight paths?

Public outreach-
1. How does the FAA communicate with the public and solicit and incorporate public input
in planning and implementing NextGen at Single-Site airports, including in developing
new or modified arrival and departure procedures? Have the FAA’s practices been
adequate in the view of aviation stakeholders and community members?

2. How is the FAA measuring the adequacy of its public engagement and outreach when
planning and implementing NextGen at Single-Site airports?

3. Is the FAA’s Instrument Flight Procedures (IFP) Information Gateway data portal
sufficiently thorough, accessible; and transparent to communicate changes in flight paths
and their potential community impacts with members of the public?

I appreciate your attention to this request. 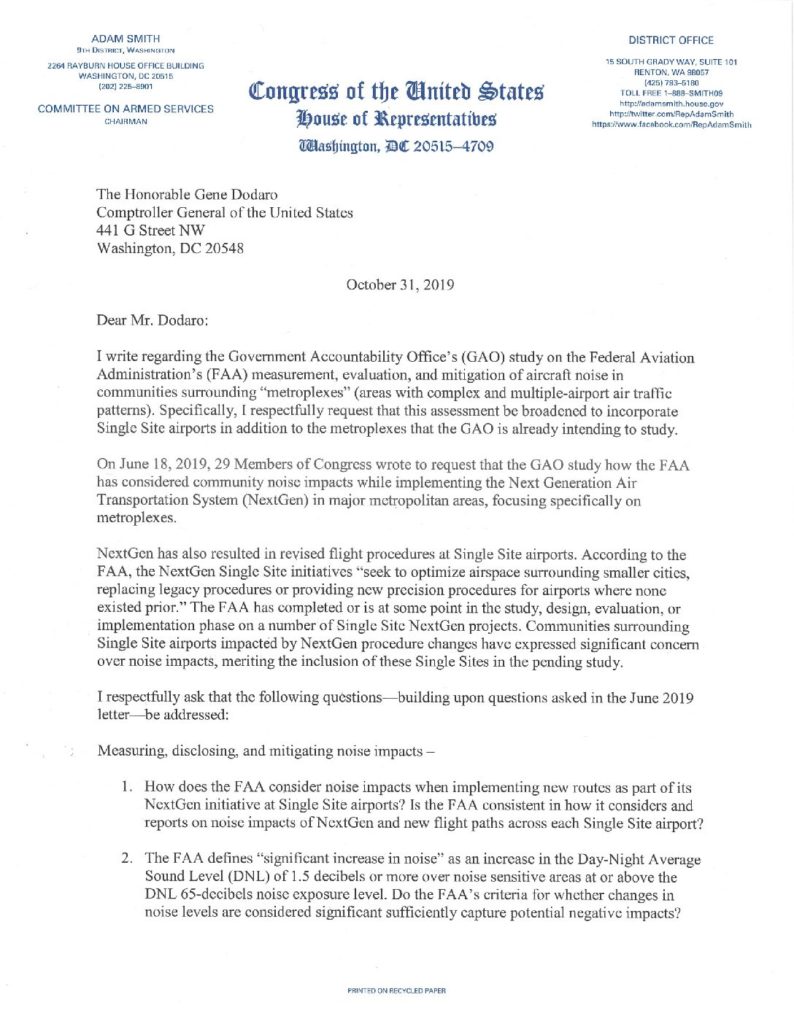