The Airport Managing Director, Lance Lyttle, provided comments on the decision of three cities to temporarily suspend their involvement. Lyttle stated that the intent of StART was and still is to provide a forum for communities to discuss and address areas of concern. He emphasized that he believes that StART has provided constructive guidance and identified numerous initial actions that benefit the communities. He apologized that the Port did not provide advance community notice on a Commission vote on SAMP-related items and reviewed which projects had preliminary design work funding approved at the Commission meeting. Going forward, he stated that the Port pledges to provide clearer and more consistent notification to cities on all relevant actions taken at future Commission meetings.

Lyttle emphasized that the Port will work in good faith to re-engage the suspended communities. Other StART participants provided comments about the value of StART, the anxieties of communities living near the airport, the importance of acting in good faith, appreciation of the initiatives underway that were recommended by StART, acknowledgement of the importance of collaboration, acknowledgement that efforts such as StART can be challenging in an adversarial environment, and the importance of maintaining perspective that incremental change is achievable and that more systemic change requires changes in federal law.

The Aviation Noise Working Group (Working Group) reported on their August 12 meeting. The summary, provided by Tom Fagerstrom, Port of Seattle, focused on the status of a number of the Working Group’s recommended efforts including:
• The status of the Revised Runway Use Agreement, which is currently awaiting FAA approval.
• The Late Night Noise Limitation Program is live.
• The Noise Abatement Departure Procedure Profiles analysis is underway and the consultant will have information to report at the October Aviation Noise Working Group Meeting.
• The contracting for a comprehensive Airfield Noise Assessment is almost complete and the consultant will likely provide an update at the October meeting.
• The new noise complaint system has been installed and gives staff the ability to provide a variety of useful reports to the Port and communities. Guidance was provided by the Working Group on what data might be useful for external reporting.

A focus of the meeting was presentations and a panel discussion on Part 150 Studies. Mary Ellen Eagan, an independent consultant from Harris Miller Miller & Hanson (HMMH), who is a national expert in Part 150 Studies, provided an overview of the history, purpose, components, and process of a Part 150 Study. She reviewed some differences between a master planning process and a Part 150 study and how data from a master planning process dovetails with a Part 150 study. She noted that Part 150 studies typically take from 1-3 years. Stan Shepherd, Port of Seattle, described the Port’s sound insulation program. He reviewed the eligibility requirements and how those are determined. He shared data on the implementation of the program and the timetable for additional projects.
After the presentations, the panel members including Cayla Morgan and Janell Barrilleaux from the FAA, answered questions asked by StART participants and covered topics including how Noise Exposure Maps are developed, the role of noise monitors in Part 150 studies, and the regulations surrounding homeowner noise insulation. StART participants emphasized their interest in changing federal policy to allow for additional sound insulation funding and eligibility, analyzing implementation of local building codes related to noise insulation, and additional analysis on local land use compatibility under flight paths.

Public comment was heard. The next meeting is scheduled for October 23 at 6 p.m., at the Conference Center at Seattle-Tacoma International Airport. The public is invited to attend.

StART meeting documents may be found on the Port of Seattle website. 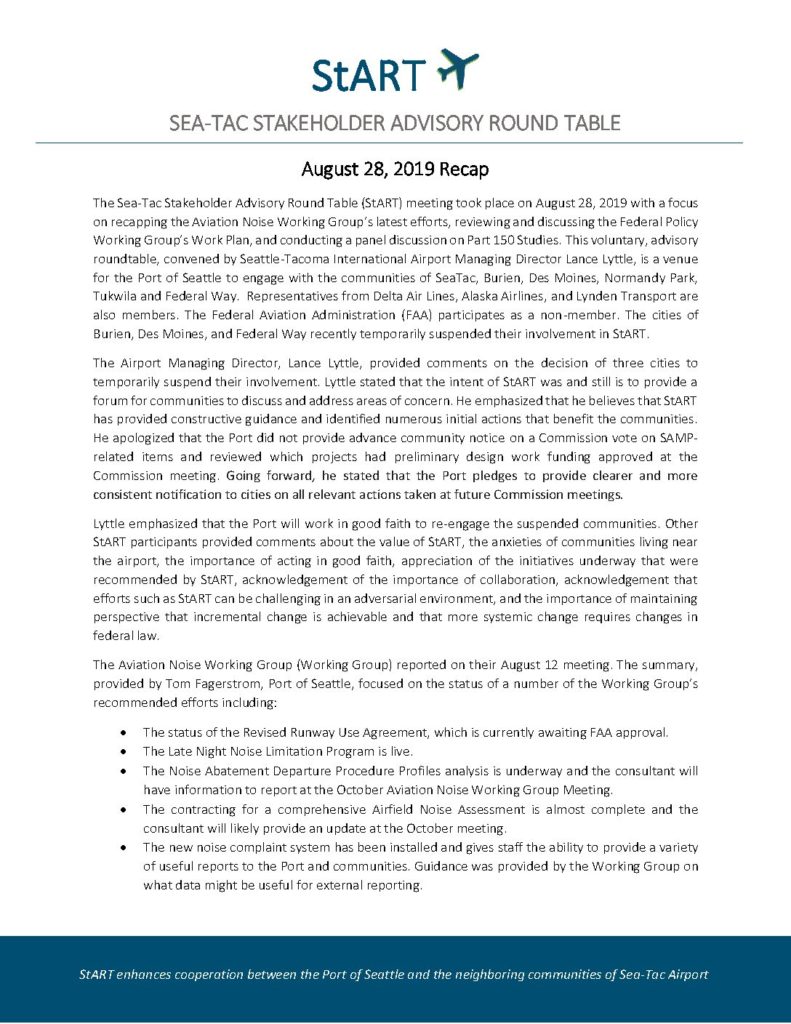