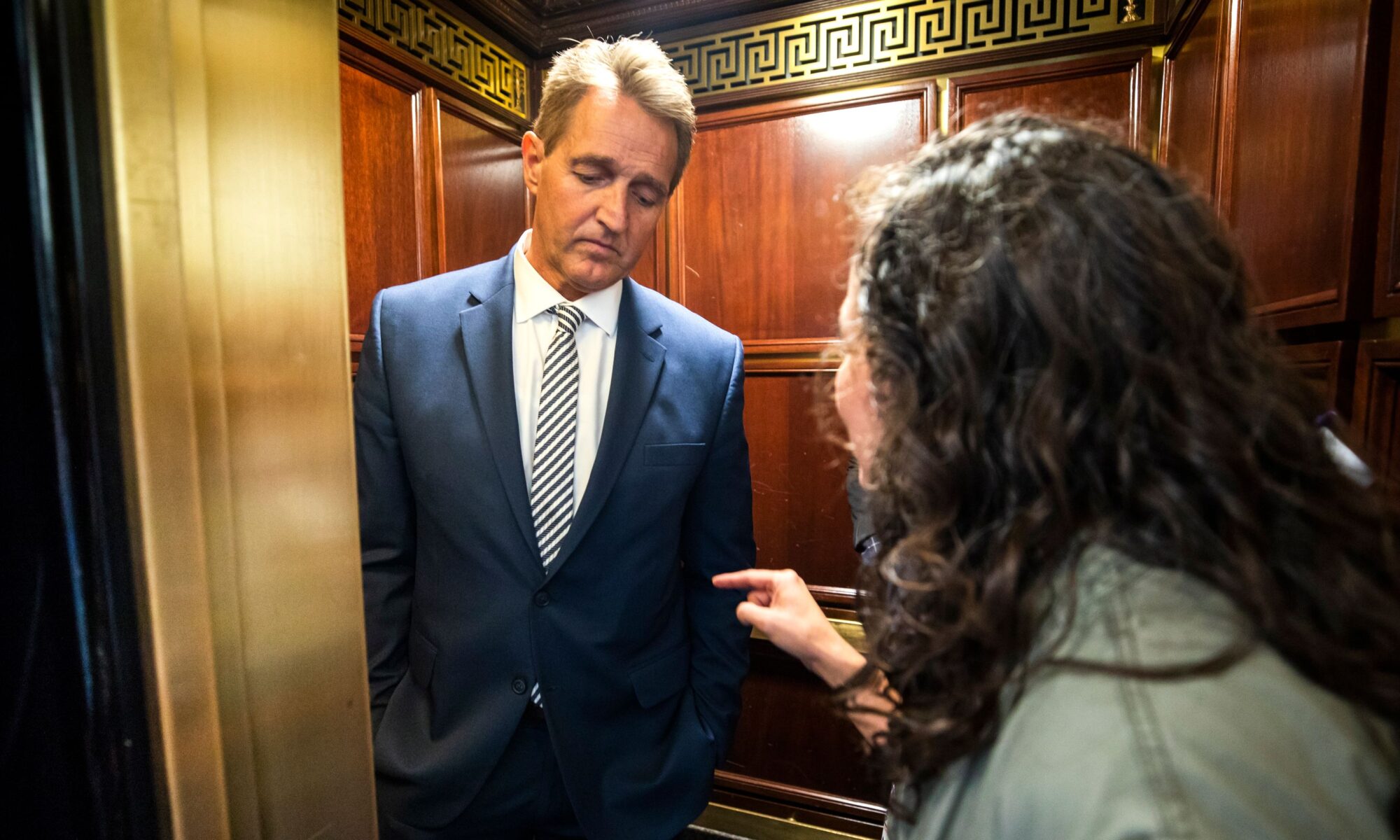 If you were watching the news today you got to see a Master Class in “How to instantly change a powerful person’s mind.”

United States Senator Jeff Flake walked out of a hearing today as a solid ‘Yes’ vote on the nomination of Judge Kavanaugh to the Supreme Court, got into an elevator and was immediately cornered by several women who had been sexually assaulted. And given that sudden, totally unexpected gift from God, they did the only thing one can do: they made the most of it.

They yelled. They cried. They invaded his personal space. They let him know exactly how hurt they were and how much he should start caring about this issue. And when Jeff Flake walked out of that elevator (or rather was set free), he had a different point of view.

It has to be personal

Now I don’t know if that was just great luck on those women’s part or a thought-out strategy. But regardless, that was an absolutely brilliant maneuver on their part. Because that is how people get their minds changed on difficult issues: not with calm, measured arguments, but with a two-by-four right between the eyes combining not just truth, but personal feeling.

Dick Cheney becomes a champion for gay rights. Impossible, right? Not after his daughter tells him she’s a lesbian. Franklin Roosevelt starts a series of summer camps for people with polio: Because he had polio. A guy approves funding for research into MS: right after his wife is diagnosed. That is how people change their minds: when it becomes personal.

We’d like to believe that people in authority are practiced in taking information from all sides and rationally weighing the arguments. But really, what they learn (very quickly) is a form of professional sociopathy: how to listen to almost any comments from the public and not be affected AT ALL.

Have you noticed how the place where the public makes comments is always a good distance from the dais? That’s not just a physical distance, it’s an emotional distance. The further the public is placed from the people in authority, the easier it is for them to remain aloof no matter how passionate the petitioner’s speech.

Whenever someone gets upset with me for not ‘following the rules’ during public meetings, first I try to ignore them. And the second time I tell ’em (politely :D) to fuck off. Because following Robert’s Rules Of Order is not designed to improve the flow of democracy. It’s designed to allow the guy at the dais to keep on schedule and make his tee time!

I should pause for a moment and tell you just how hard it was for me to develop this approach. Like most of you I HATE CONFLICT. But I quickly realized that adhering to the ‘decorum of the meeting’ was for saps. It never gets you anywhere unless you’re already in a position of authority.

Now I’m not suggesting to go looking for trouble. Rather, I’m saying that you should consider what would have happened if those protesting women had decided to take their three minutes to speak under controlled conditions. Under those circumstances do you really think Senator Flake would have changed his mind? I didn’t think so.

So as protesters, we have to find ways to interact on a personal level with decision makers. It is very, very difficult to get them to ‘feel our pain’ unless we’re able to be physically close to them.

Now, I can hear you saying something like, “Well those women were raped!”, which implies that their outrage was in a completely different ballpark of ‘worthiness’ from the assaults the airlines make on us. If that’s how you feel inside; ie. that our struggle isn’t as important as #METOO? Then we need to talk, girlfriend.

We can never–and I mean never hope to win this fight unless enough of us feel it waaay down deep. And then we need to find creative ways to project that hurt onto those in power. We literally need find a way to get them to ‘feel our pain’.

I’ll put it another way. Ask yourself this question: if you’re at a public gathering, do you care more about being polite or changing that Senator’s mind? Be honest. Most of us probably lean towards ‘being polite’. We’ve been trained all our lives that politeness and behaving in an orderly fashion matters most in all situations.

I’ll just ask you one more time to consider the women above. If they hadn’t been willing to act (or rather found themselves unable to keep from acting out!), we’d probably be talking tonight about Judge Kavanaugh taking his seat on the court. In the two minutes they held Senator Flake captive in that elevator, they accomplished more than a hundred thousand people could by following the rules.