Greenhouse gas emissions from commercial air travel are growing at a faster clip than predicted in previous, already dire, projections, according to new research — putting pressure on airline regulators to take stronger action as they prepare for a summit next week.

The United Nations aviation body forecasts that airplane emissions of carbon dioxide, a major greenhouse gas, will reach just over 900 million metric tons in 2018, and then triple by 2050.

But the new research, from the International Council on Clean Transportation, found that emissions from global air travel may be increasing more than 1.5 times as fast as the U.N. estimate. The researchers analyzed nearly 40 million flights around the world last year.

“Airlines, for all intents and purposes, are becoming more fuel efficient. But we’re seeing demand outstrip any of that,” said Brandon Graver, who led the new study. “The climate challenge for aviation is worse than anyone expected.”

Airlines in recent years have invested in lighter, more fuel-efficient aircraft, and have explored powering their planes with biofuel.
Over all, air travel accounts for about 2.5 percent of global carbon dioxide emissions — a far smaller share than emissions from passenger cars or power plants. Still, one study found that the rapid growth in plane emissions could mean that by 2050, aviation could take up a quarter of the world’s “carbon budget,” or the amount of carbon dioxide emissions permitted to keep global temperature rise to within 1.5 degrees Celsius above preindustrial levels.
If Seeing the World Helps Ruin It, Should We Stay Home?
June 3, 2019

The decision by Greta Thunberg, a young climate activist, to sail across the Atlantic rather than travel by air ahead of her speech at the United Nations next week, has refocused attention on aviation’s role in causing climate change and its consequences, including sea-level rise and more intense heat waves, hurricanes, flooding and drought.

Climate protesters have said they plan to gather in Montreal next week, where airline regulators are set to hold their own summit.

William Raillant-Clark, a spokesman for the U.N. aviation body, stood by its emissions projection, which he said was “the most up-to-date” and provided “a clear picture on the future environmental trends.” He added that the group “endorses and welcomes wholeheartedly” calls for the aviation industry to address climate change with greater urgency.

Underlying the growth in aviation emissions is the rapid expansion of air travel worldwide, propelled by a proliferation of low-cost airlines and a booming tourism industry catering to a growing middle class.

A separate study released this week by the industry group Airports Council International found that the world’s fastest-growing airports were in emerging economies; 12 of the top 30 were in either China or India. 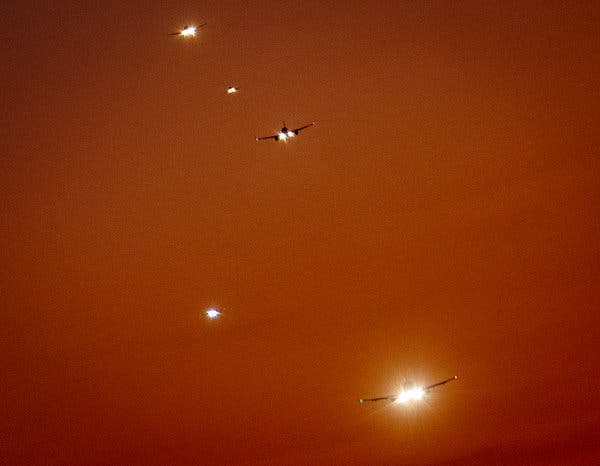 Still, the new data from the clean transportation council found that flights from airports in the United States were responsible for almost one quarter of global passenger flight-related carbon dioxide emissions. China was the next biggest source of passenger aviation emissions, followed by the United Kingdom, Japan and Germany; the lowest-income countries that contain half the world’s population accounted for only 10 percent of all emissions.

The study underscored the heavy carbon-dioxide footprint of domestic flights, often left out of negotiations over global emissions-reduction targets. Domestic travel accounted for a large majority of departures in countries including the United States, China, Indonesia, Brazil and Australia.

Governments have pledged to take major steps to improve fuel economy in their routes and fleets. Under a plan adopted by the U.N. body, the International Civil Aviation Organization, three years ago, airlines will start to voluntarily offset most of the growth in their carbon dioxide emissions beginning in 2020. Carbon offsets compensate for emissions by canceling out greenhouse gas emissions elsewhere in the world. (For example, the offset may involve paying for renewable energy or other programs designed to reduce emissions.)

Some governments have suggested going further. In Germany, the Green Party has suggested banning domestic air travel altogether to force Germans to travel by train, which pollutes less.

“At a time when students are going on climate strikes around the world, this will really put pressure on the aviation industry to be much more ambitious,” said Annie Petsonk, international counsel for the Environmental Defense Fund. “They’re beginning to understand that for most people who fly, aviation is the biggest part of their personal carbon footprint.”

An earlier version of this article misstated the nature of a global aviation summit meeting in Montreal next week. While industry representatives will be present as observers, the meeting is for airline regulators and diplomatic delegations, not executives.

Hiroko Tabuchi is a climate reporter. She joined The Times in 2008, and was part of the team awarded the 2013 Pulitzer Prize for Explanatory Reporting. She previously wrote about Japanese economics, business and technology from Tokyo. @HirokoTabuchi • Facebook