An air quality survey of airborne toxic o rganic compounds and carbon monoxide was conducted in the vicinity of Seattle-Tacoma International (Sea-Tac) Airport Samples were collected during four late fall to early winter days in 1993 at locations within the Airport Operations Area. upwind of the airport, downwind of the airport, near International Blvd, and at a residential location in Normandy Park. The sampling periods were selected to contrast different meteorological conditions and corresponding modes of airport operation. EPA reference methods were used to collect volatile organic compounds (VOCs), including benzene, with evacuated canisters, and carbonyl compounds, including formaldehyde. with reagent coated cartridges. Approximately 50 % of the VOCs tested for in the study were detected in the evacuated canisters. Benzene, a specific target, was found in every sample collected. In general the canister sampling data did not indicate variations with meteorology or mode of airport operation. Generally higher concentrations were collected at Gate B3 and next to International Blvd, while relatively lower concentrations were observed at the residential location in Normandy Park. However these trends were not consistent for every compound or sampling period, and the monitoring network did not discern significant differences in upwind versus(.’ c-~–.\;:c_tj_:.:-downwind concentrations. While not directly comparable, concentrations of several of -~~~ VOCs collet;:ted at Sea-Tac Airport were higher than the screening criteria used ~’L!_h~_~a.?_IJ.i.Q_gto~9.epar”tr:!l~D_I_Q.f_£~~1Qgy_f9r assessment of toxic pollutant emissions from a new stationary industrial source. These VOC levels at Sea-Tac Airport are not ————-~——-~-· atypical, with measured concentrations within the range observed in other urban areas_. The signature or ratios of several key VOCs were indicative of automobile exhaust and did not resemble the VOC profiles —-··—-· ·-·- ·——-~-··——–~—–··——.—————–·-··—-. . . —-associated with aircraft emissions. · — ————-·–· –The canister samples collected in the study were also analyzed for carbon monoxide. The carbon monoxide levels observed in the study did not follow any distinctive temporal or spatial pattern. The monitoring network did not indicate tha! Sea-Tac Airport airfield operations were a significant source and all carbon monoxide concentrations in the survey were less than the 8-hour average national ambient air quality standard. The survey included measurements of formaldehyde and other carbonyl compounds at three locations, representing a potential source area site. an upwind site, and a downwind site. Formaldehyde and acetaldehyde were present in all the samples and acrolein was always detected at Gate B3. The average concentrations of these compounds were higher for the sampling periods when the airport was in a south fT6w_~.9~~~t;p~-~~t·i·;-~-.-Th~ ~;iatively high~r v~iues also occu~r~d-f~;the ~a~pli~g periods ~hich i~cl~ded the late afternoon and it is unclear whether the higher values were caused by different modes of operation or different periods of the diurnal cycle. Samples of formaldehyde, acetaldehyde, and acrolein were higher at Gate B3 than at the upwind or downwind locations. The upwind/downwind carbonyl sampling data collected in this study were indicative of active sources at Sea-Tac Airport. Formaldehyde, acetaldehyde, and acrolein samples collected in the study were higher than the new stationary industrial source screening criteria applied by the Washington Department of Ecology for these compounds. FCJrmaldehyde. acetaldehyde, and acrolein concentrations observed at Sea-Tac Airport were within the range reported for other urban areas. Sea-Tac Airport Air Quality Survey Report -iii . January 1995
) ) 1.0 Introduction An air quality survey was conducted of airborne toxic organic compounds and carbon monoxide in the vicinity of Seattle-Tacoma International (Sea-Tac) Airport. The study was performed by the Atmospheric Sciences Group of McCulley, Frick and Gilman. Inc. on behalf of the Port of Seattle. Samples were collected during the period from October to December 1993. within the Airport Operations Area (AOA), upwind of the airport. downwind of the airport. near a major roadway, and at a residential location in Normandy Park. The methodologies that were employed for sample collection and the results of the study are described in the remainder of this report. 1.1 Background The Washington Department of Ecology (WDOE) conducted a screening level assessment of emissions and concentrations from airport sources based on the application of the FAA’s Emissions and Dispersion Modeling System (EDMS)., While the 1991 study was only intended as a screening assessment and did not include an air sampling program. WDOE’s report evoked a very concerned response from the nearby community. The report suggested that the airport might be a significant source of toxic air pollutants, and that the neighboring community might be at risk. The WDOE report has been cited by citizens opposed to proposals to expand Sea-Tac Airport’s operational capacity and to develop the South Aviation Support Area. WDOE’s study suggested the primary toxic pollutants of concern were benzene and other volatile organic compounds (VOCs). Benzene, toluene, isomers of xylene and other VOCs are present in jet fuel and are contained in jet turbine exhaust du.e to incomplete combustion. Evaporation of fuel during storage, refueling, and fuel handling operations also results in emissions of these VOCs. These same compounds are also contained in gasoline and automobile exhaust, and elevated levels observed in many urban areas have been attributed to automobiles. 2 In addition to VOCs emitted by aircraft operation, members of the study steering committee expressed concern over formaldehyde and carbon monoxide (CO) levels near Sea-Tac Airport. The steering committee is comprised of representatives from concerned citizens groups and regulatory agencies. Formaldehyde has received regulatory attention as a possible carcinogen and CO is a criteria pollutant regulated under the Clean Air Act. Formaldehyde and CO are directly emitted as the result of incomplete combustion. Formaldehyde, acetaldehyde, and other aldehydes can also be formed in the environment as the products of oxidation of virtually all hydrocarbons and play an important role in photochemical processes. Formaldehyde and acetaldehyde are emitted by vehicles that use oxygenated fuels like methanol and have also been reported in the literature as one of the principal hydrocarbon components of jet turbine exhaust. 3’4 Sea-Tac Airport Air Quality Survey Report – 1 -January 1995 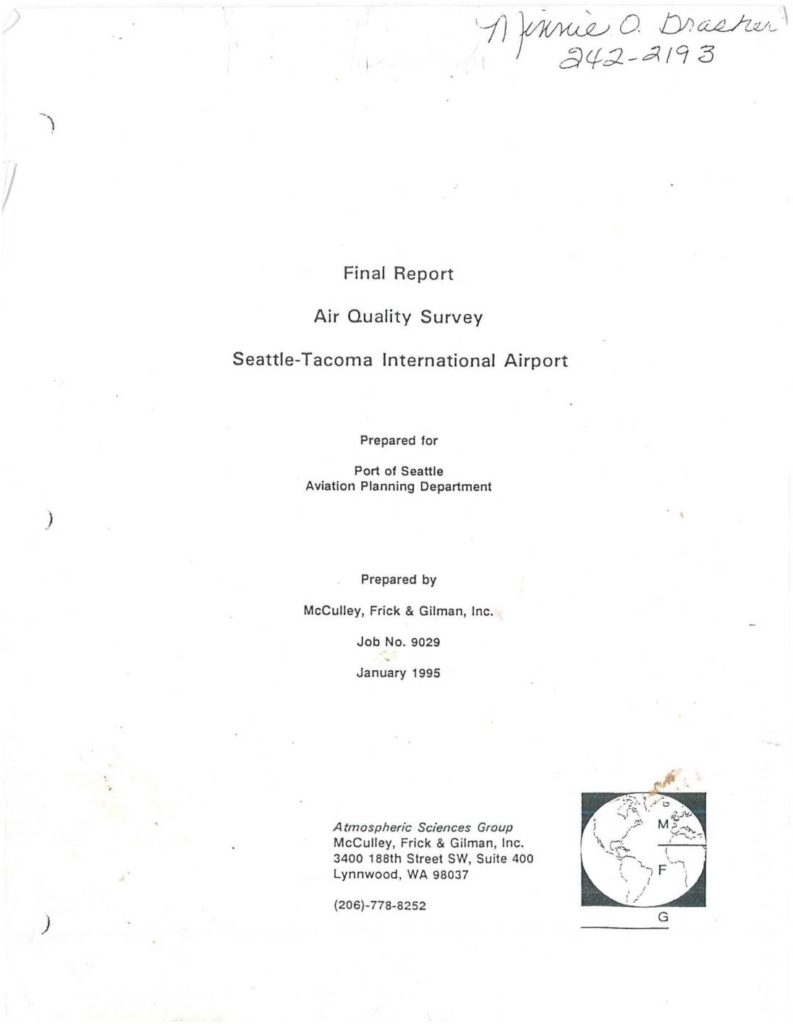