In October 2019, the Commercial Aviation Coordinating Commission (CACC) convened to begin the process of developing recommendations for a new primary commercial aviation facility in Washington. The commission was created by the Washington State Legislature because of concerns that Sea-Tac International Airport is nearing its capacity limits. Several studies released over the span of several years corroborate the persistent challenge of commercial aviation capacity in the Puget Sound region. In addition, the Puget Sound Regional Council (PSRC) Aviation Baseline Study currently underway confirms these findings.Aviation demand is multi-faceted and includes many types of passenger demand (international, interstate and regional) as well as air cargo and general aviation. Each type of demand has differing facility needs, such as runway lengths and aircraft storage. While part of the capacity solution could be a new commercial facility, there may also be opportunities for current airports to accommodate some passenger and air cargo demand. In addition, emerging technologies such as electric-powered and other alternate propulsion aircraft may change the equation of air transportation demand in the years to come. Adding additional complexity to the decisions at hand is the uncertainty around the long-term impacts of the COVID19 pandemic on future aviation demand.The Commission has adopted a three-phase methodology. For Phase One, the Legislature has charged CACC to develop a short list of six airports by January 1, 2021. During Phase Two, it will identify the top two airports by September 1, 2021. During Phase Three, the CACC is required to choose, by sixty percent majority vote, a single preferred location by January 1, 2022. The commission shall project a timeline for the development of an additional commercial aviation facility (single preferred location) that is completed and functional by 2040 and must make recommendations on future Washington state long-range commercial facility needs. It should be noted the schedule for these recommendations may be extended by the Legislature due to the disruption in workflow and communications, and the uncertainty with return to normal aviation activity caused by the pandemic…

AT ANY TIME, THE PUBLIC IS ENCOURAGED TO DIRECT QUESTIONS AND COMMENTS TO:
Christina Crea
WSDOT Communications
360-810-0902
CACC@wsdot.wa.gov 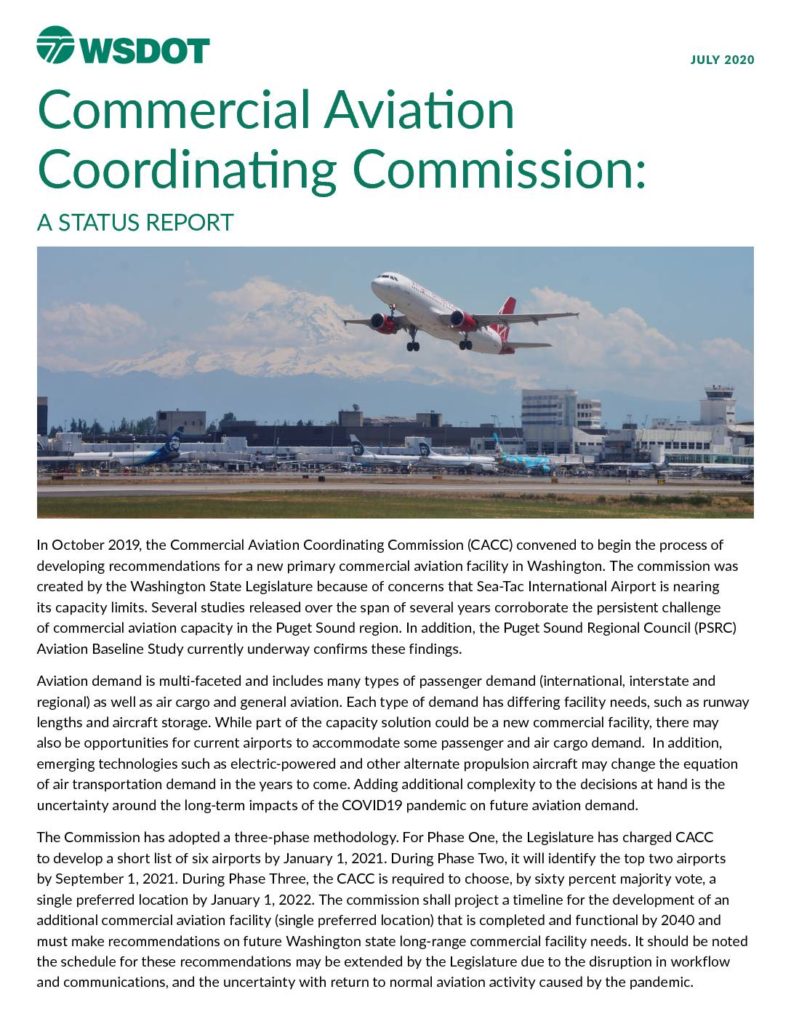