We have greatly appreciated the opportunity afforded to us, through this Committee,
to work on behalf of the citizens of Des Moines in relation to the significant
environmental and public health challenges presented by Sea-Tac Airport
operations.

Our aviation committee has played a valuable role for the City in terms of collecting
information, monitoring significant developments, formulating policy
recommendations, and taking actions. However, our conclusion after observing the
July 9, 2020, City Council meeting, is that the City is moving away from placing
reliance on citizen input and leadership from this DMACC, and transferring its work
to the City Manager and staff.

We recommend that the City continue forward with a strong, and more independent,
DMACC. Like the City of Burien, a strong aviation committee can yield significant
results. However, our assessment is that our own service on the DMACC has not
engendered the Council’s confidence to the extent that the Council would have
required consultation on matters that are core to the DMACC mission and that are
vital to the long-term interests of our City in relation to aviation. This must change if
the DMACC is to have value.

At the July 9, 2020, City Council meeting, the decision to rejoin the Seatac Airport
Round Table (StART) was briefed to the Council and confirmed by motion. Although
the DMACC in collaboration with the Burien aviation committee had jointly created
criteria with 13 changes to the StART format before rejoining, it appeared that as the
result of negotiations involving City managers and Port personnel (as far as we
could surmise), not a single criterion was met.

While we have very limited information (only what we saw at the meeting), we
believe this decision is a significant strategic and tactical error. The guiding principal
for the decision appeared to be that enough time had passed and there was value in
“being at the table.” This “at the table” notion was previously discussed quite
meticulously, over many months and meetings, by your DMACC and by Burien and
Federal Way. The conclusion of the three cities that withdrew was that, without
specific reforms, the opposite was true – that being at this StART table was in fact
producing harm and would hurt the long-term interests of the City.
I’m sure you can appreciate that the Council’s adopting a motion to rejoin, appearing
to have no formal agreement with the Port on a single one of the joint criteria,
without consultation of your DMACC, based on a hope that being at the table will
work when the only historical evidence is that being at the table did not work (and
which was predicate to suspending), was discouraging.
Accordingly, we believe it is incumbent upon us to get out of the way, and our
sincere hope is that this new approach by the City will be supported by the
necessary resources to go toe-to-toe with the Port and industry on StART. Our
shared goal remains the same – to protect our environment and the public health of
our citizens. We will be the first in line to applaud the outcomes that our City
manager and this Council have committed to achieve by rejoining StART.
In the meantime, we plan to continue our advocacy for Des Moines through our
other volunteer engagements and projects, including Quiet Skies Puget Sound, the
Washington Department of Commerce Aviation Impact Study, the Washington
Department of Transportation Commercial Aviation Coordinating Commission, and
assisting the legislative offices of, among others, Congressman Adam Smith,
Senators Karen Keiser and Claire Wilson, and Representatives Tina Orwall and
Mike Pellicciotti, whenever and however we can. Of course, we are happy to consult
with the City in the future.
Again, thank you for the opportunity to serve as part of this valuable Committee.
Shelia Brush
Steve Edmiston 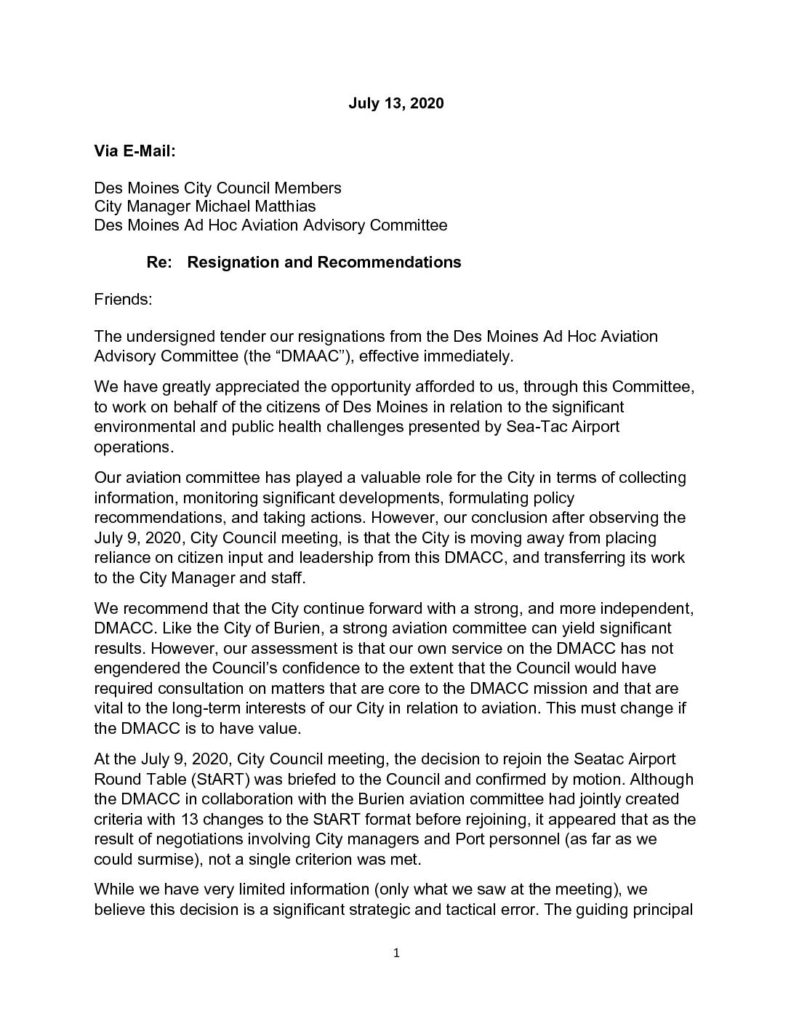