In a short, non-precedential decision, the D.C. Circuit rejected all of Petitioners’ arguments with only a brief discussion of each point. In summary, here are the Court’s principal holdings:

Petitioners argued that the FAA failed to meet its obligation under Section 709(c)(1) of the Vision 100 Act, to “take into consideration, to the greatest extent practicable, design of airport approach and departure flight paths to reduce exposure to noise and emissions pollution…” The Court rejected that argument by pointing to evidence in the record that the FAA had made changes to the Metroplex procedures in order to address noise and emissions concerns while still providing airspace efficiency and safety enhancements as called for in the Vision 100 Act.

Air Quality Conformity. Petitioners argued that the FAA had failed to comply with the Clean Air Act’s conformity requirements by concluding that the SoCal Metroplex could be presumed to conform to the Clean Air Act State Implementation Plan. Petitioners asserted that because most of the changes would occur below the 3,000-foot “mixing height” and would increase fuel burn, the FAA could not presume that the procedures would have only a de minimus effect. The Court rejected those arguments finding that, in fact, most of the changes would occur above 3,000 feet and that the FAA was justified in finding the changes below 3,000 feet were de minimus based on the multi-factor balancing test the FAA was authorized to use in connection with NextGen projects.

Climate Change/Greenhouse Gases. Petitioners argued that the FAA had failed to adequately consider how the SoCal Metroplex would affect global warming because the FAA claimed that the project would increase greenhouse gas emissions by only a small amount. Petitioners argued that Council on Environmental Quality guidance did not permit dismissing climate change impacts based only on a comparison to global emissions. The Court found, however, that the project greenhouse gas emissions were so small they fell below the CEQ’s threshold for conducting further analysis.

Unlike in the Phoenix case, in which the FAA relied on a Categorical Exclusion for its environmental analysis of NextGen procedures, the FAA prepared an Environmental Analysis and Finding of No Significant Impact before implementing the SoCal Metroplex. On that record, the Court was willing to give the FAA considerable deference, with respect to both the FAA’s balancing of interests in designing the new air traffic control procedures and in the FAA’s construction of its own orders and guidance. This decision underscores how difficult it is to challenge FAA decisions regarding air traffic control and safety.

For more information about the litigation, please contact John Putnam at jputnam@kaplankirsch.com 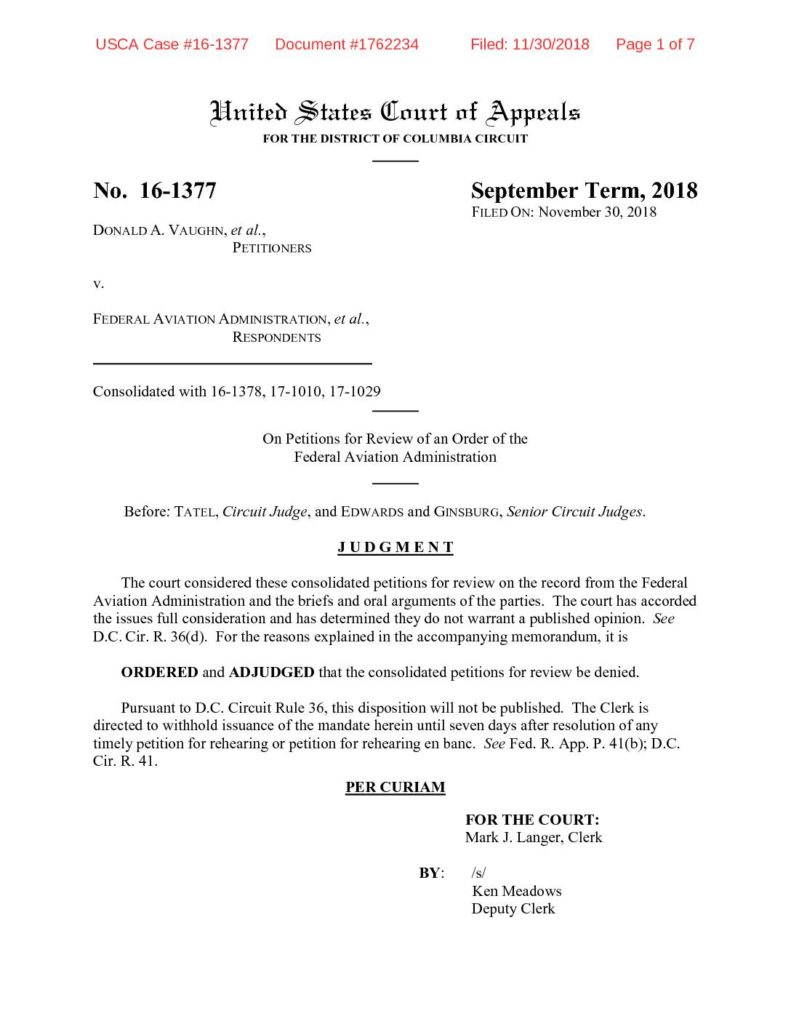